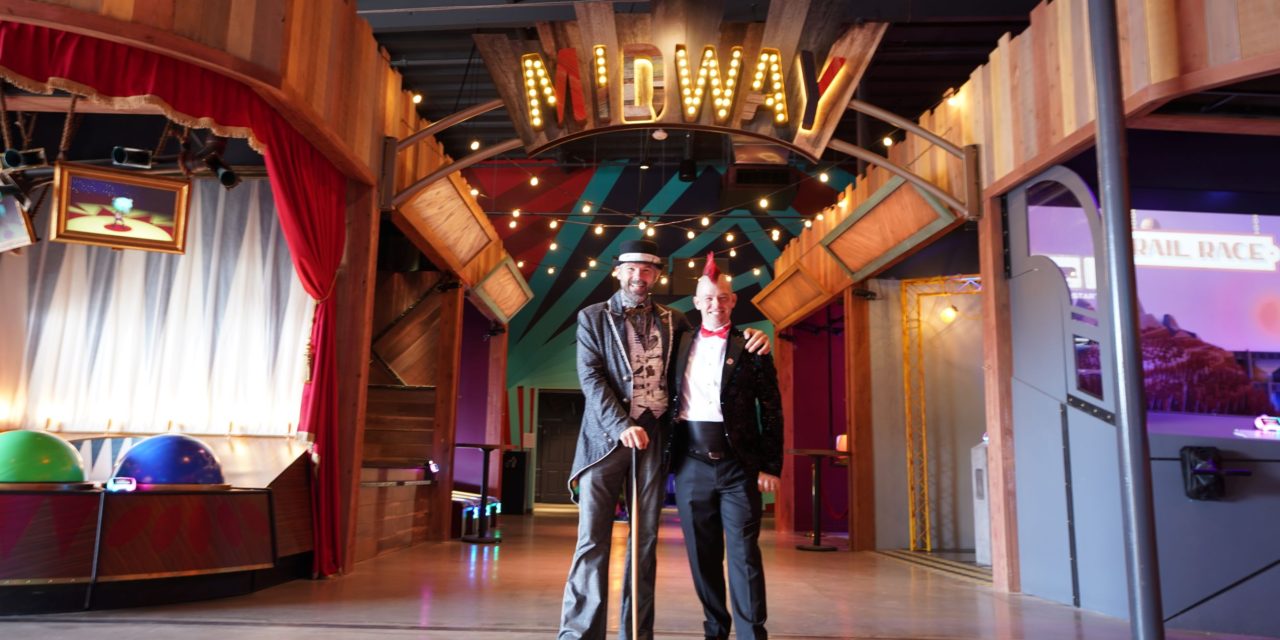 Get ready for a next level entertainment experience unlike any other, enter the Two Bit Circus! Beware of good times and stimulating competition.

Downtown Los Angeles on the up and trendy street of Mateo, there is an odd group of carneys that have built a circus unlike anything you could imagine. The two inspiring minds that started the madness invited our Cannapolitan team to take a tour of their mini amusement park and experience the future of arcades and much more.

Two Bit Circus has set the bar high for the most imaginative and unique amusement park arcade in the country, hands down! We had the opportunity to spend several hours playing the games, interacting with strangers; challenging them at multiplayer games that are completely exclusive to TBC. The experience was much more than we could have imagined and had us wanting more time to play.  So many game options; physical, virtual, classic arcades, pinball, story rooms, virtual reality cabana rooms for groups and there is a bar…

The Bartender is a Robot

Yes, there is a bar inside the Two Bit Circus with drinks that will thrill with looks and tastes. The bar is big top themed crossed with a engineered plot. Several feet away there is a different kind of bar, where there is a robot bartender. That’s right, a robot! This one is a character that can mix drinks like no other. It’s something you have to see in person to believe. 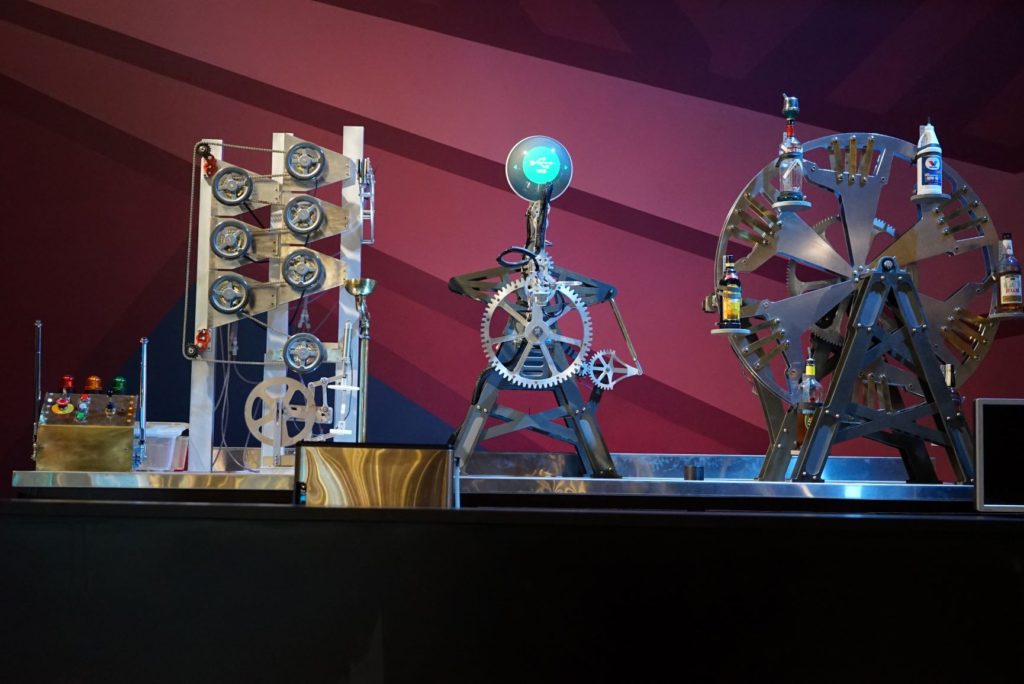 Mrs Pacman is in the building

Think you’re too old for virtual reality pods or a virtual maze too high tech, no problem. There are plenty of arcade games and midway games that are physical and challenging. Classic upright arcade games such as Mrs. Pacman, Street Fighter II, and a newer version of Pacman that allows four players to play against each other and the ghosts in Pacman Battle Royale.

Two Bit Circus stands out completely for their originality on all levels, especially when it comes to original games designed by their team of genius carneys. Games like “Wiffle Waffle” where you fling waffles through puddles of butter to hit targets for points. We liked the choice of waffle characters to choose from especially the waffle that looks “baked.” Another original game console involves moving around mine fields that the player has to narrowly touch briefly for points, yet too close and its total destruction. We highly recommend the button wall game, which is a two player game similar to Twister but on a high tech level. There are simply too many games to mention here, you have to experience this place to know. 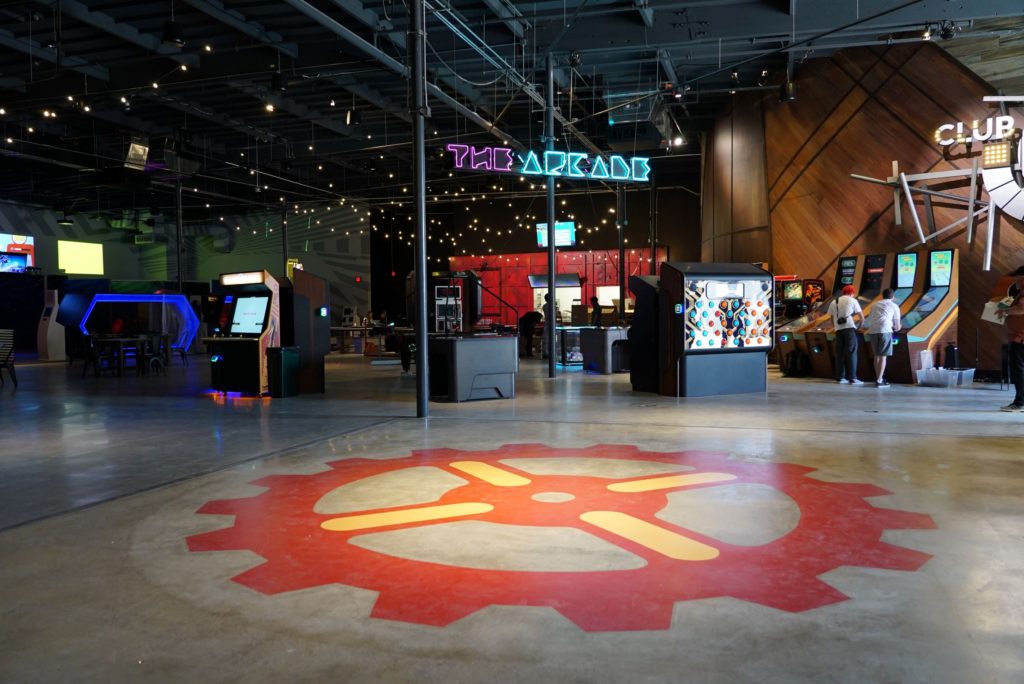 The possibilities are endless in the world of virtual reality and TBC has dialed it up to beyond 10 when it comes to variety and fun. Enter the Halogate and join three players as you fight off alien invaders to compete in real time for points. There are also individual VR stations and pods that have moving seats that allow one to ride on a set of virtual reality roller coasters. Another VR pod game has the player interacting in a tank situation fighting enemies. Groups of six or less can choose to reserve the VR cabanas where there are couches and the ability to engage friends on a more closed environment.  Last but beyond least there are the “story rooms” that are escape rooms  on a virtual reality level. Players work together to solve the rooms’ puzzle and complete the mission. The rooms are decorated very much like the game itself once you have your VR headset on inside. 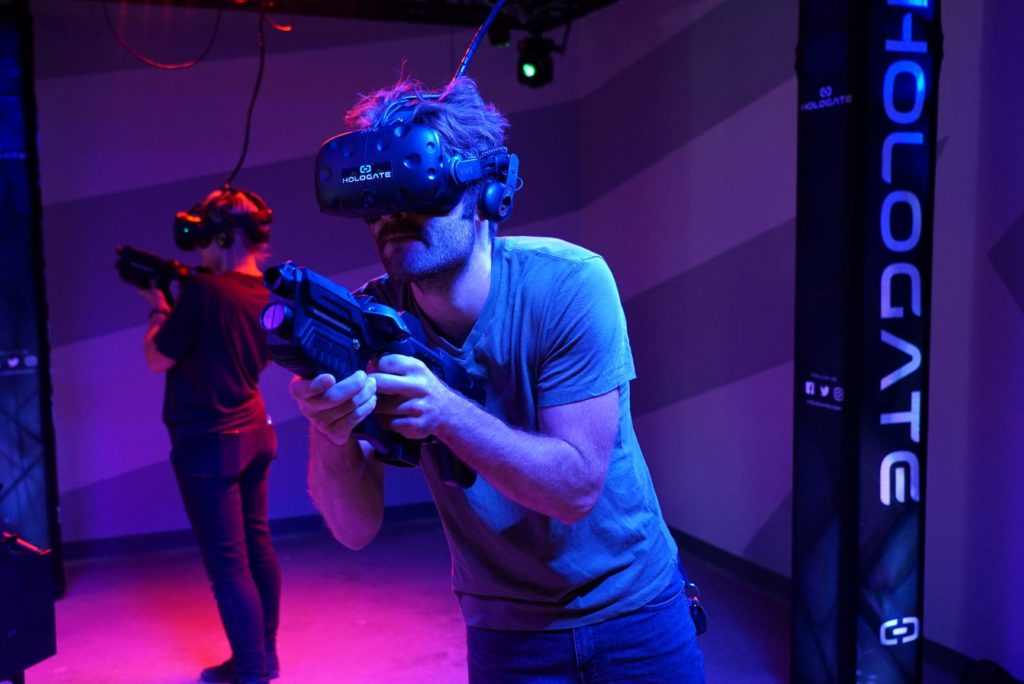 Midway games on another level

TBC also has a physical midway selection of original games that are fun for all ages. There is a demolition game where two players compete to swing the wrecking ball at the screen to destroy the building. The virtual balloon popping game with colored balls is fun and will have you thinking and moving quick.  Keeping with the circus theme; there is a game that involves large actual balance balls from the circus and are used as trackball mice for a game that has each player competing to stay on the edgy platform and avoiding getting bumped off by the others, it’s a ton of fun!

Who are these mad geniuses?

The minds behind Two Bit Circus started with two friends Brent Bushnell and Eric Gradman met over a decade ago and have been tinkering and building unique and interactive installations together ever since. Their shared passion for engineering and technology has gradually lead them here to this overwhelming achievement of science, technology, imagination and interactive utopia. Every move they have made since has lead them closer to the reality of making this amusement park a shining dream come true. Brent Bushnell has always marveled and toyed with electronic engineering. Perhaps it stems from his father Nolan Bushnell, founder of a little well-known gaming system called Atari! So Brent was born to expand on his family’s destiny beyond a home game console. Eric Gradman is the mechanical genius and had worked in robotics and rapid prototyping, so it was a perfect match of S.T.E.M. (Science, technology, engineering, math) minds that lead to this marvelous park. Eric may look less reserved, but he’s the crafty one (no he’s not the one with the mohawk, that’s Brent.) 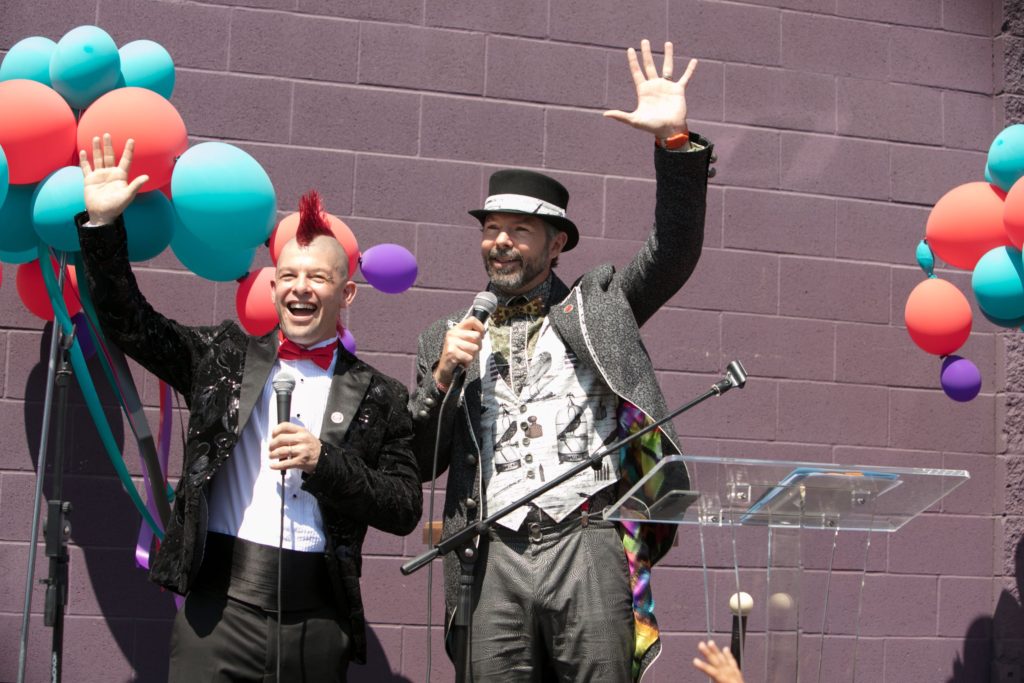 There’s a Boxcar restaurant when you get the munchies

Just like all things at TBC, the food has a unique spin on carnival food, but on a gourmet level. How about some sliders with tater tots? Perhaps a skewer of meatballs is right up your alley? Flatbread pizzas, veggie options, and much more.  The menu  definitely has the inspiration of someone who smoked a joint and had the best munchies ever and made them. Whatever your taste, there is surely something that will find your fancy. 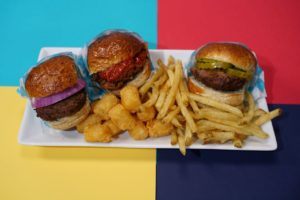 I took a friend’s son Michael with us for a beta night that we were invited to before the grand opening day. As a avid game player, he was impressed and had a blast playing games with people three times his age. He was engaged with the VR stations possibilities. If that wasn’t enough of a test, I brought my 64 year old mother with us and even she picked up on most of the games fairly quickly and had a lot of fun with us “kids.”

There’s even a “Quiz Club”

Looking for a more relaxed yet intriguing and interactive game to play, then Club Q is the spot to be. Inside this space of the park is a night club designed to have the whole room interacting via quiz questions that equal points. The beauty of this room is that the quizzes can be customized to the groups, some games include drinking games. Something tells us it would be a lot more interesting with cannabis somehow, but we’ll cross that bridge when that is a possibility.

Overall Two Bit Circus is worthy for a variety of demographics of  fun enthusiasts looking for a fun time and interacting in an environment designed to do just that. TBC is perfect for families, friends, dates and groups looking to get in touch with their inner child and the live in the moment. Cannapolitan approved fun!

Two Bit Circus officially opens today September 7th and right now you can have more game play with their specials during their first month opening:

Get $50 worth of play for only $25!
Monday-Thursday, through the end of September.

Go to TwoBitCircus.com for more details, directions and more.

Tell them you read all about the Two Bit Circus here in Cannapolitan. 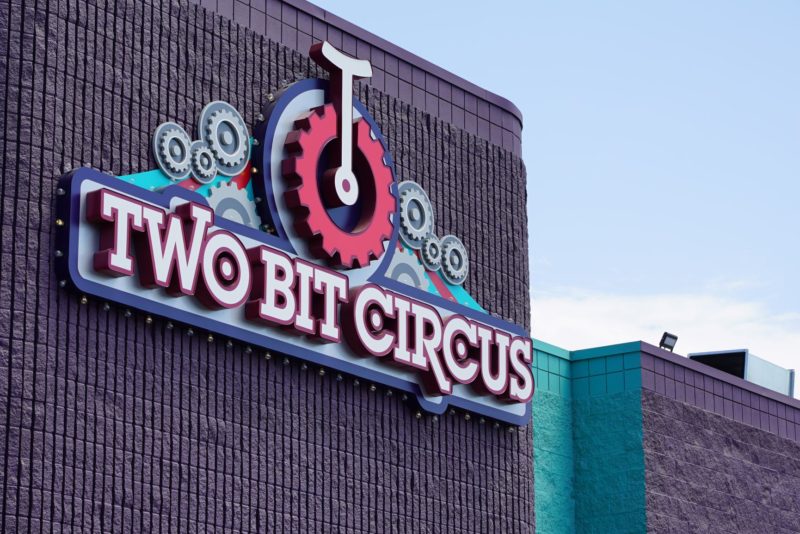 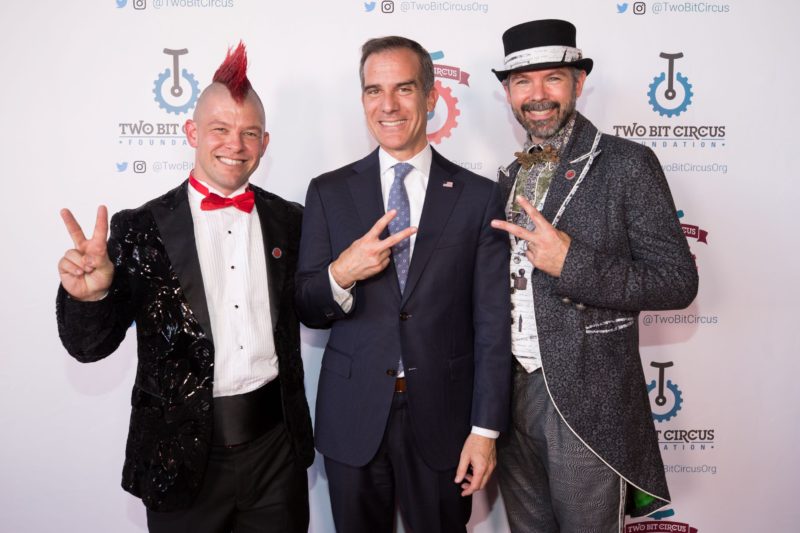 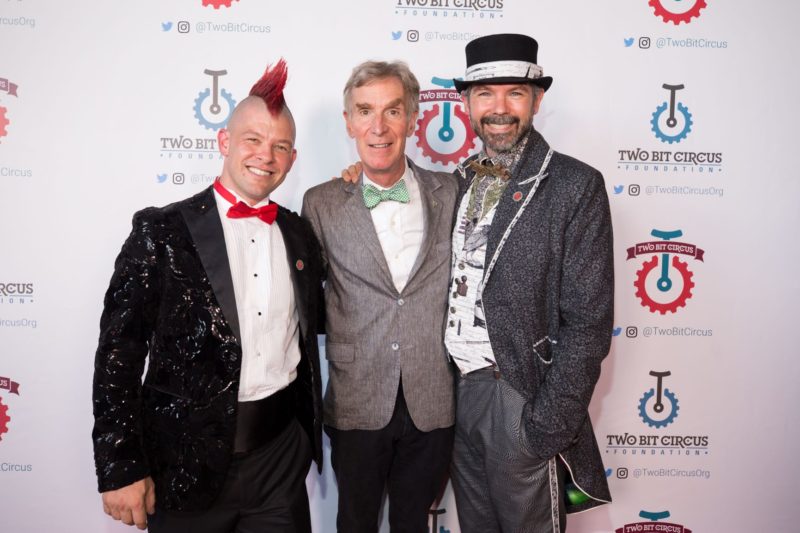 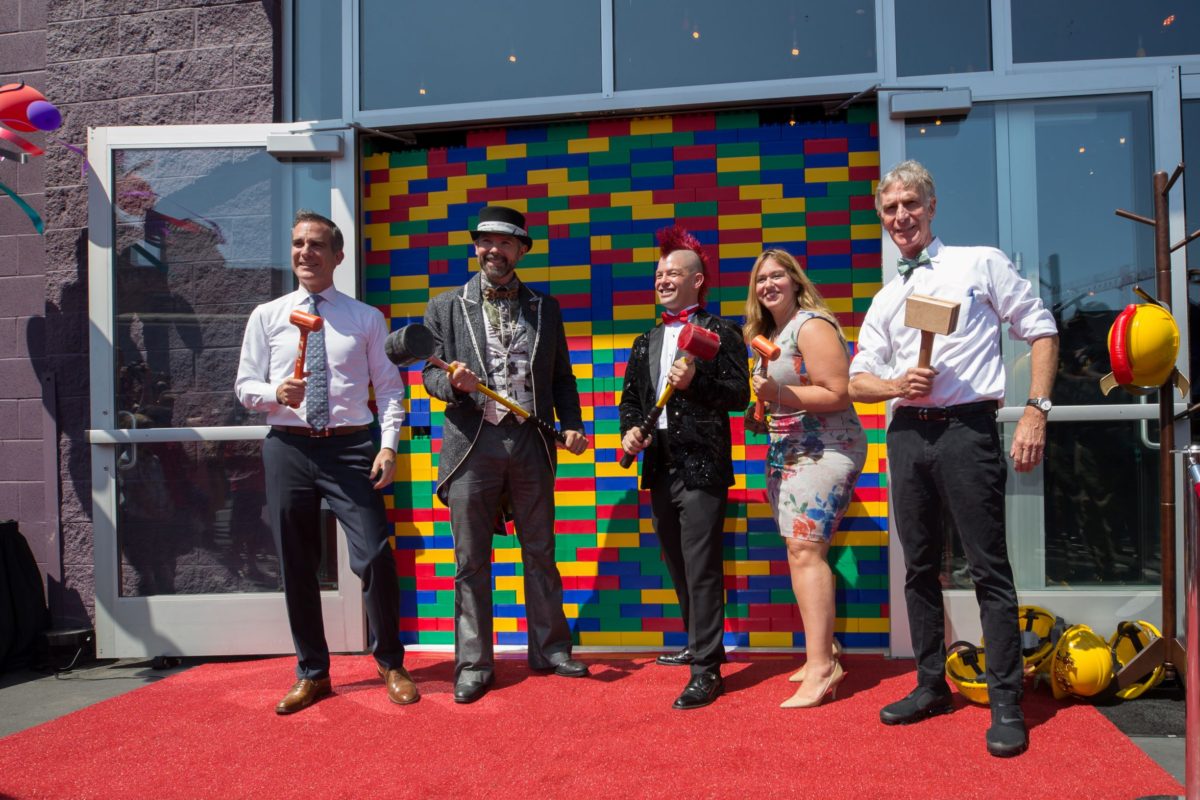 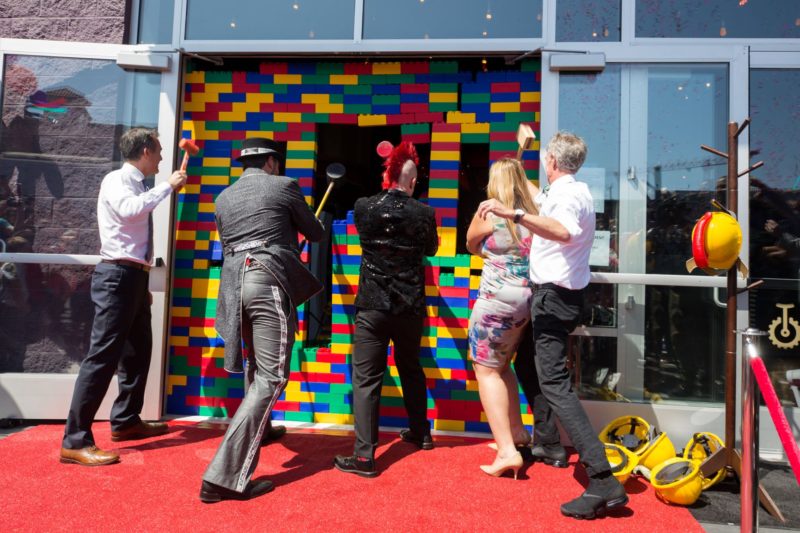 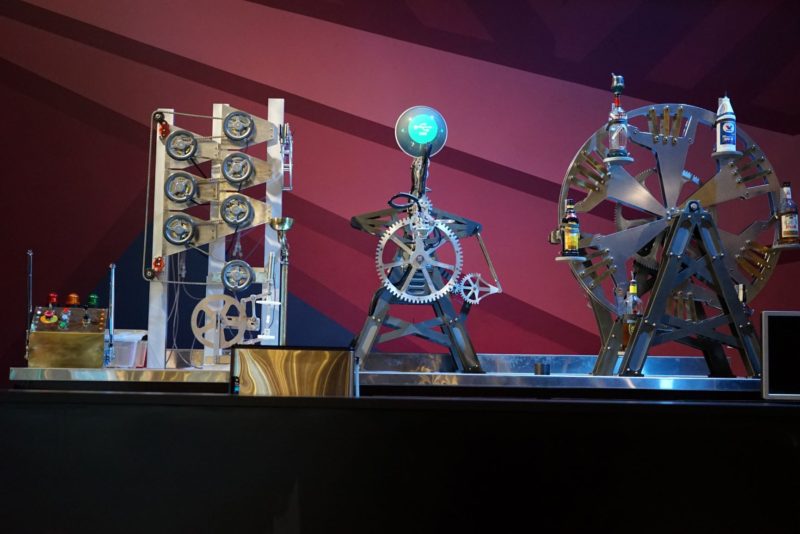 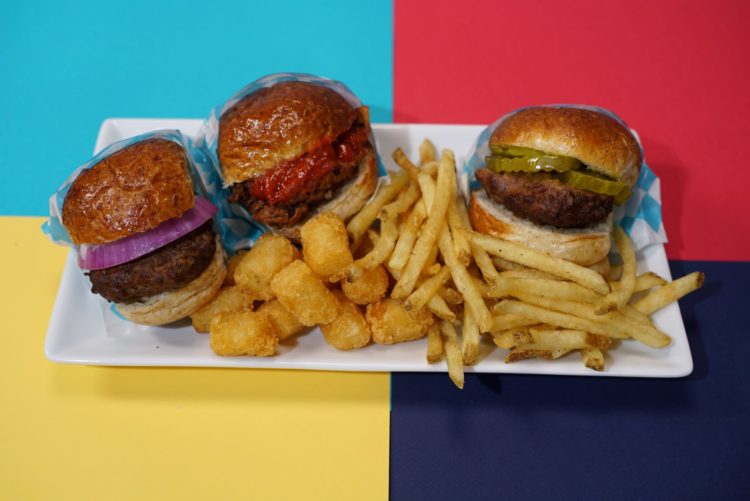 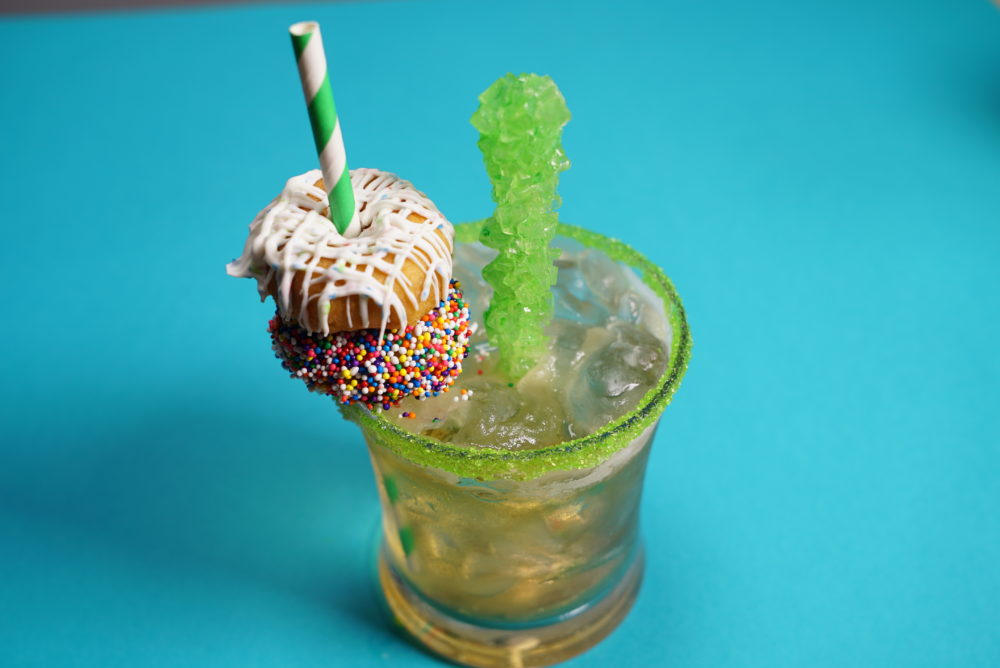 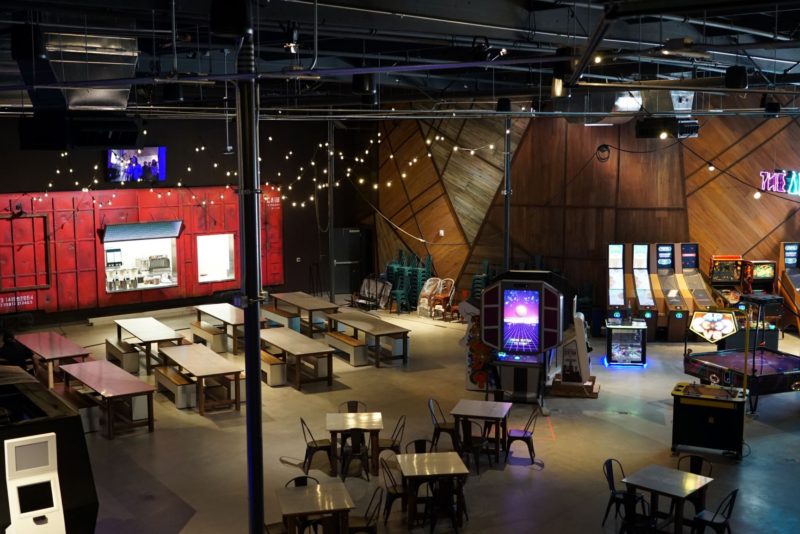 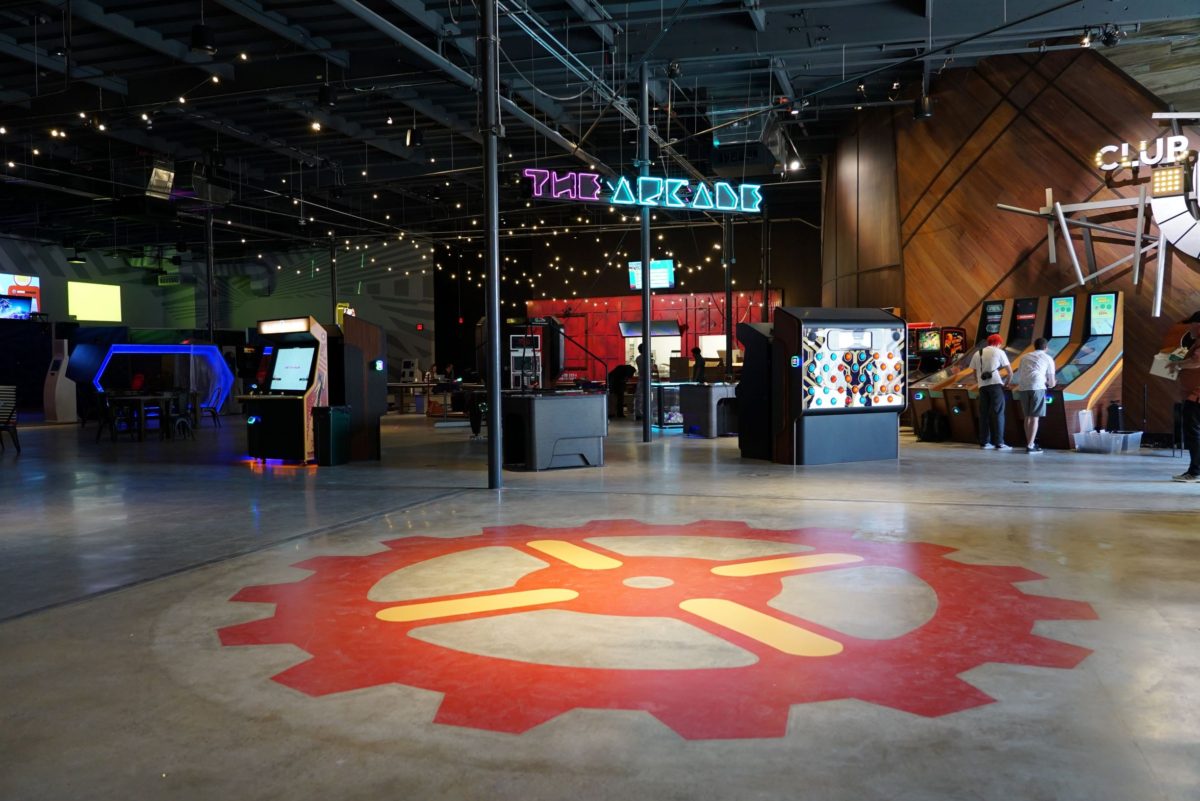 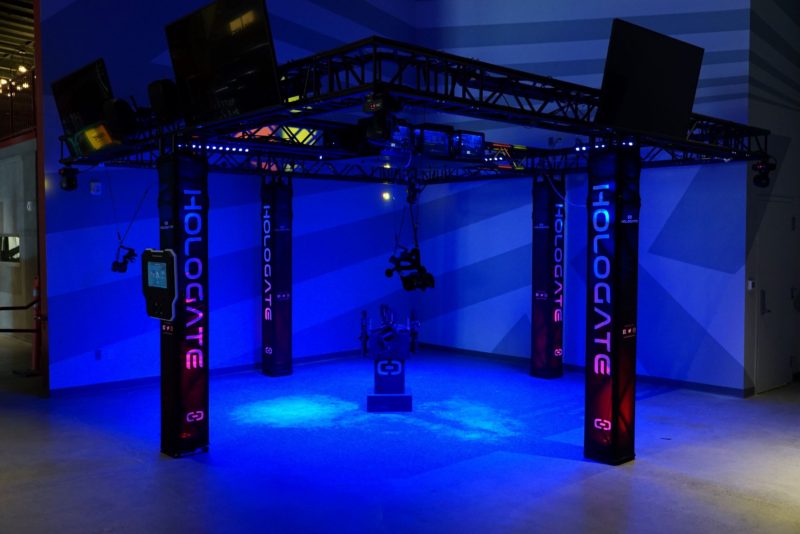 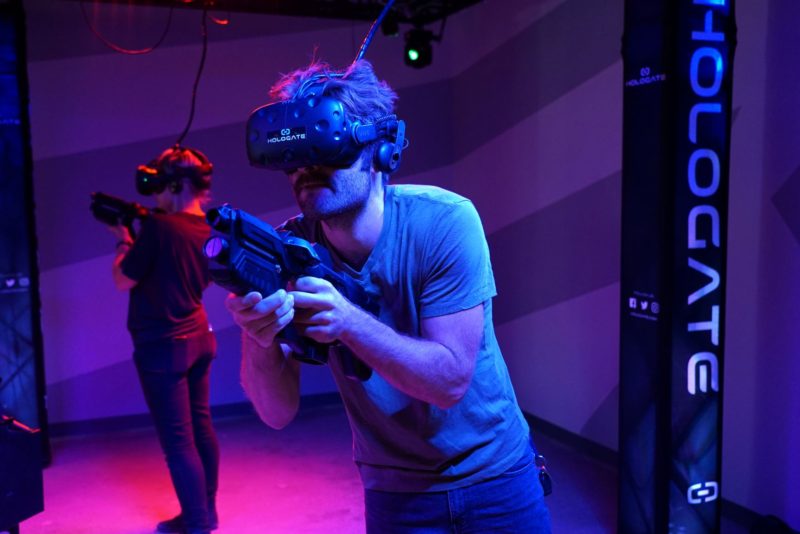 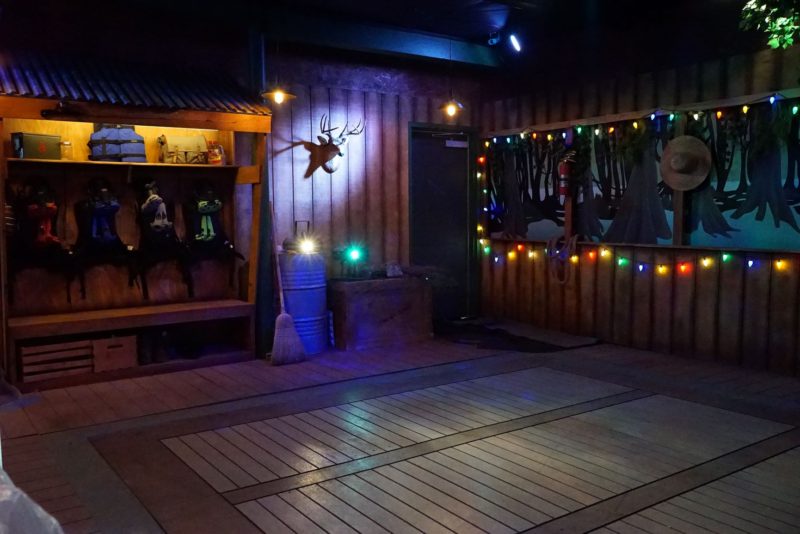 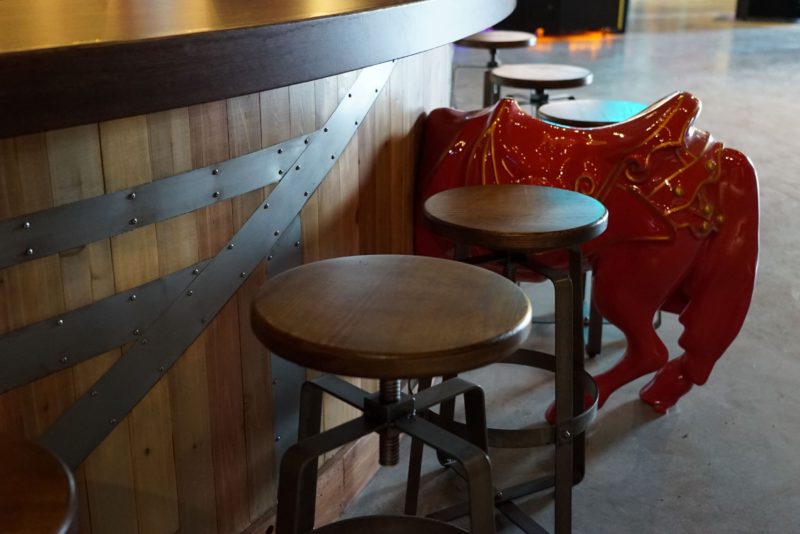 Wildflower is passionate about music, cannabis, and good living. Favorite strains: Blue Dream, Tangie, Jack Herer, any OG variety. Hashtag: #ilitmyjointanyway As a writer for The 420 Times in Los Angeles, Wildflower has seen the evolution of cannabis and has witnessed it come out from the shadows and go mainstream in a decade's time. She is a music junkie and 110% Cannapolitan and loves to share the knowledge.

Reason #23 why we love @highrizeca and they are th

Make sure you scroll through! What a historical an

Find only the best Cannabis and brands featured in